This post includes affiliate links. We may earn a small commission (at no cost to you), if you purchase through these links.
Jump to Recipe

Black sesame pudding is creamy, lightly sweet and rich with roasted black sesame seeds. If you love the flavor of black sesame, you will love this pudding! Made with just five ingredients, this is a dessert we often make at home. It's simple and impressive. Enjoy chilled with a bit of whipped cream.

Why This Recipe Works

If you haven't tasted Black Sesame Pudding before, you are in for a real treat. This is a super onolicious dessert. It's an elegant but simple (truly the best combo) pudding made from milk and cream and lots of black sesame seeds.

Black Sesame Pudding has a velvety texture but is still light (because it is whipped). And oh man, the roasted flavor of black sesame is so happy tasting.

It's not a loose type pudding. It's slightly firmer, almost like a cross between custard and pudding and mousse. Nutty and rich. Top with whipped cream and enjoy!

This recipe has roots in a Japanese dessert called Kurogoma Purin:

That breaks it down pretty clearly, yes? ^_^

We love black sesame seeds so much that we purchase it by the two kilogram bag (and go through it quickly!) Black sesame is one of the most wonderful ingredients in the world.

Black sesame paste is made from roasted black sesame seeds that have been ground up super fine, almost liquified! All the oils from the sesame seeds are release and it has the texture of a liquid-paste. It's spreadable and spoonable and just very delicious.

You have 2 options when it comes to black seasme paste:

We hope you love exploring the world of black sesame as much as we do.

Agar agar is similar to gelatin in that they are both gelling agents. There are several differences between gelatin and agar agar, but the main two is that agar agar is vegan and desserts made with agar agar set more firm (where as gelatin set desserts are more wobbly).

Agar agar comes in many forms, but powder seems to be the most popular and easiest to find. You can find it at any Japanese market (also available online but it's about four times (!) more expensive online).

Learn more about agar agar and find many dessert recipes in our agar agar dessert post.

Note: If you can't find agar agar powder (though it's really worth seeking out), you can use gelatin in place of agar agar for this recipe. Slightly different in texture but still tasty.

Gather everything together and we can start cooking!

Cool briefly.
Remove from heat, let cool for 10 minutes (or place in an ice bath and proceed immediately to the next step).

Whip.
Pour in the heavy whipping cream and whip the mixture for 3 minutes.

Tip: Make sure you really whip, whip, whip the mixture to incorporate air. This makes the pudding still so rich and creamy but also light at the same time.

Portion and chill.
Divide the mixture between 3-4 small dessert bowls. Let chill in the fridge for 2 hours.

How long can this dessert keep?

2-3 days, covered, in the refrigerator.

More on this coming soon! We love to make a black sesame pudding layered with a soy milk pudding...so good ^_^

You can adjust the sugar or use honey in place of sugar.
As long as you keep the final volume of liquid the same you can change up the ratios of whole milk (or soy milk) and the heavy cream. I wouldn't recommend doing all/only milk though (because the pudding won't be as creamy and velvety). 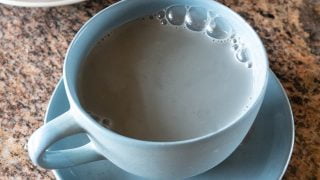 Next →
J-Shop (Oahu)
Mahalo for Reading!Click here to cancel reply.